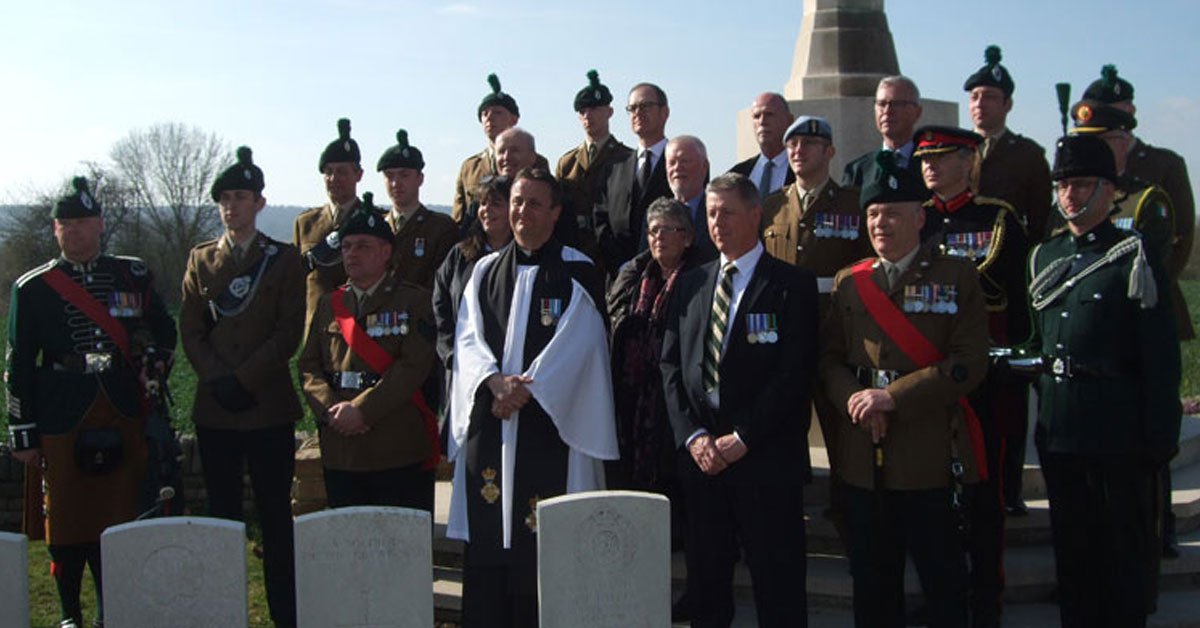 This article was written by Michael Nugent, a Trustee of the Inniskillings Museum, a Director of the Military Heritage of Ireland Trust, a member of the Western Front Association and an associate member of History Hub Ulster. 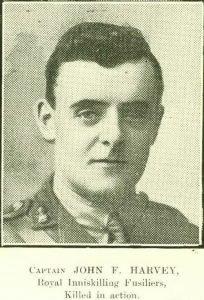 It was whilst carrying out research for my book on the 36th (Ulster) Division in March 1918, that I first encountered Captain Harvey.

I was visiting Noyon New British Cemetery, around 30 miles south-east of St Quentin, when I came across a number of headstones bearing the Inniskilling insignia including these two beside each other and away from where other Inniskillings were interred. 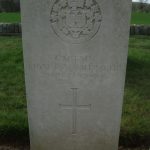 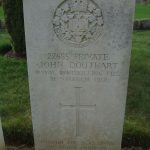 My interest was aroused as firstly, I did not expect to find any Inniskillings in this cemetery as the battalions of the regiment were in action some distance away and secondly, as I reasoned that there could not have been a large number of soldiers with the rank of Captain killed at that time.

Initial checks with the Commonwealth War Graves Commission indicated that there were two Captains from the Inniskillings killed in the period 21-31 March 1918. One, Captain Arthur Hodder Robbins was attached to 7/8th Inniskillings with the 16th (Irish) Division. He was killed in action aged 22 on 21 March 1918 and is buried at Ste Emilie Valley Cemetery, Villers-Faucon. The other was the unknown Captain, interred at Noyon.

Later in my research, I was piecing together the actions on a day to day basis of the three Inniskilling battalions, 1st, 2nd and 9th, involved in the German Spring Offensive, with the intention of providing an account of the fighting withdrawal of the 36th (Ulster) Division at that time.

On 23 March 1918, the withdrawal had been ongoing for two days and all Inniskilling battalions had crossed the river Somme and St Quentin canal and were gradually being pushed backwards by overwhelming numbers of German stormtroopers.  On the morning of that day, 9th Inniskillings were at the village of Brouchy having arrived there the previous night. The battalion war diary recorded the events of the day:

At about 7 am on 23rd March the battalion marched out of Brouchy and took up a line from the railway bridge through Aubigny. At about 11 am an enemy attack forced us back on Brouchy, but a counter-attack was made and Aubigny was re-occupied with few casualties. The battalion was again driven out of the village, but again counter-attacked in the afternoon, re-taking Aubigny, this time suffering heavy casualties. One light and two heavy machine-guns were captured and many casualties inflicted upon the enemy. 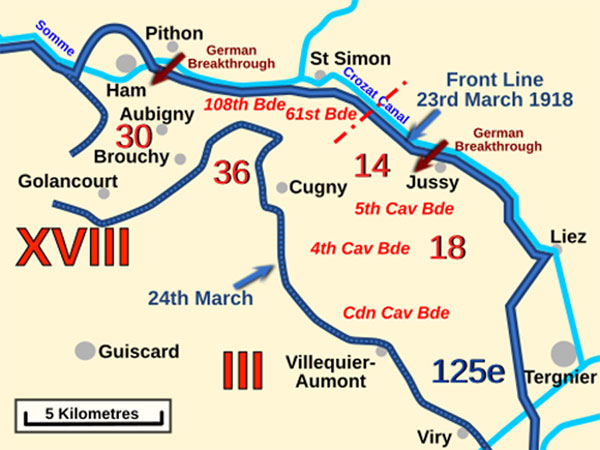 Crucially, the war diary included a nominal roll of casualties with the first name being Captain JF Harvey, listed as killed in action. There were no others in the rank of Captain listed.

But how to prove John Harvey was the unknown Captain buried at Noyon?

The key was the man buried beside him, Private John Douthart 27685. Research quickly established that John Douthart was attached to 9th Inniskillings and analysis of his Commonwealth War Graves Commission records indicated that he was killed on 21 March 1918. This is almost certainly wrong. (Many of those who fell in the period of the German Spring Offensive are given the death date of 21 March or 21-29 March, due to the chaos and confusion which existed)

His Commonwealth War Graves Commission graves registration documents show that he, and an Unknown British Captain Royal Inniskilling Fusiliers, were initially buried at Brouchy Churchyard, most likely by French civilians and in a graves concentration process in 1934, were exhumed and re-buried at Noyon New British Cemetery. 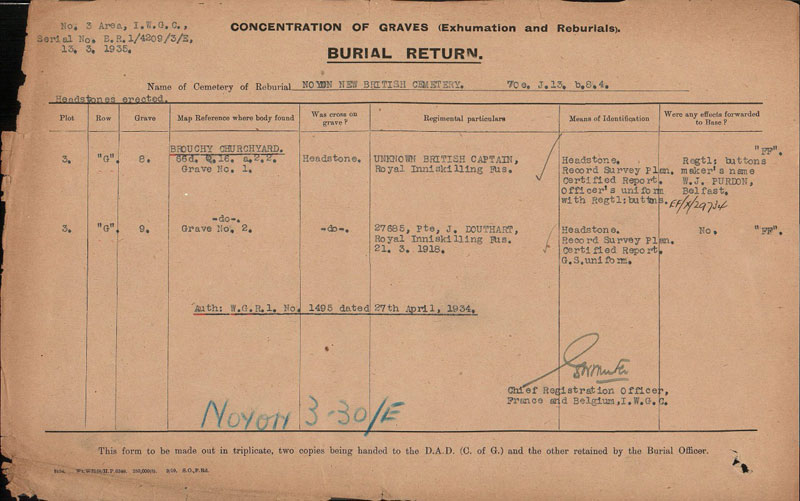 This was the evidence that I needed that the remains interred at Noyon could only be those of Captain Harvey. Further corroborating evidence was also contained on this document, namely the details of the exhumation which details that the Captain’s uniform bore Inniskilling badges and was provided by W J Purdon, Belfast (WJ Purdon were Manufacturer’s Agents based at Union Street, Belfast)

John born on Saturday, 27 January 1894 at Ballymaconaghy on the outskirts of Belfast, the eldest son of William and Elizabeth Harvey, nee Forsythe. William Harvey was a Leather Merchant in Belfast. John had two siblings:

The 1901 Census of Ireland shows the family as resident at house 1 in Castlereagh. Little is known of John’s early childhood and by 1911, the family was resident at house 8, Cregagh, Castlereagh. At that time, John aged 17 was an Apprentice in the Linen Trade. Records indicate that he was employed by Messrs Richardson Sons & Owden, Linen Manufacturers at Donegall Square North, Belfast. This building now houses Marks & Spencer.

Like many young men at the time John would have been acutely aware of the deepening Home Rule Crisis and along with many thousands of others he signed the Ulster Covenant opposing Home Rule for Ireland, doing so at Strandtown Presbyterian Church, Belfast on Saturday, 28 September 1912. At that time, he gave his address as 41 Palmerston Road, Belfast.

John enlisted in the 12th (Reserve) Battalion Royal Inniskilling Fusiliers at Newtownards on 8 September 1915. This battalion had been raised in April 1915 and its purpose was to train men who would then be posted to the Regiment’s Service battalions. On enlistment, John gave his occupation as a Warehouseman and his next of kin as his father, William, 41 Palmerston Road, Belfast. John was issued with the service number 12/26043 and travelled to Finner Camp, near Ballyshannon, County Donegal to begin training.

Also attached to 12th Battalion was a Private John Douthart 27685. Born at Macosquin, Co. Londonderry in 1894, John was the eldest son of Samuel and Elizabeth Douthart. Samuel Douthart was a Shoemaker and prior to enlisting, the family was resident at Fairhill Street, Ballycastle. At that time, John Douthart was employed as a Carpenter.

In November 1915, John Harvey, by then a Lance Corporal, applied for a Commission, stating his preference for the Infantry. His application was recommended by his former employer Charles Richardson, and his level of education was affirmed by the Vice Principal of Belfast Municipal Technical Institute. John’s application was approved by the War Office and he was directed to report to No 7 Officer Cadet Battalion at the Curragh on 5 April 1916. Successful in his course of instruction, John was appointed as (Temporary) Second Lieutenant in the Royal Inniskilling Fusiliers on 7 July 1916.[1] Appointed on the same day was Second Lieutenant William Hanna Patterson.

Both men were posted to 9th (Service) Battalion Royal Inniskilling Fusiliers (Tyrone Volunteers) arriving on 25 September 1916. At that time the Battalion were in billets at Dranoutre, seven miles south-east of Ypres, Belgium. John remained with the battalion and would have seen action at Messines, Langemarck and Cambrai in 1917, rising through the ranks to become a Captain and Company Commander by the beginning of 1918.

This was as far as my research was able to proceed as I waited on notification of progress from the CWGC. Finally, in January 2019, I received the following from the MOD Joint Casualty and Compassionate Centre – popularly known as the History Detectives. 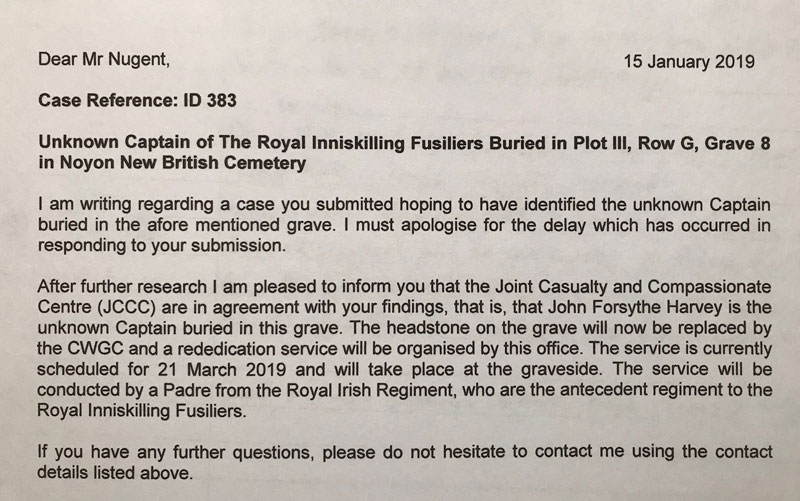 Notice of acceptance by MoD

The race was now on to identify surviving relatives. Working with my contact Rosie Barron at the MOD JCCC, we managed to trace two great nieces’ resident in Northern Ireland and other family members in the UK, Canada and the United States.

I met with the Northern Ireland connection, Valerie, Pauline and Dennis in late January. At an emotional meeting, I explained how I had come across Captain John Harvey. What they were able to tell me added a whole new dimension to the story.

John’s memory had certainly not been forgotten within the family. In particular, Pauline and Valerie’s father (and John’s nephew) kept a portrait of him in uniform in a prominent position in his home. He had also made attempts to find out what had happened to John by writing letters (in pre-internet days) to the Commonwealth War Graves Commission. In a sad twist, he died in his nineties in November 2018, unaware of the findings I had made.

The family members brought a large amount of memorabilia to the meeting including John’s Death Penny, family photographs and most importantly two letters. The first was from John’s commanding officer, Lieutenant Colonel Warren John Richard Peacocke DSO and Bar to his parents. Dated 1 April 1918, the letter states how John was killed having just successfully led a counter-attack and goes on to offer words of comfort.

The second letter however, is of greater significance. John Harvey and his friend 2nd Lieutenant William Hanna Patterson, had agreed that if the worst happened to one, then the other would write to an agreed family member – not the parents, outlining what had happened.

On 20 April 1918, 2nd Lieutenant Patterson wrote to John’s younger brother William from the British Red Cross Hospital, Netley, where he was convalescing after having been wounded. In the letter he outlines how John (who he knew as Jack) fell:

On 23rd March about 3 o’clock, Jack’s Coy was forced to evacuate a village (I don’t remember its name at present) I was with him in the village. We sent the Coy out in small parties, then we started off. We did not get further than 100 yards when Jack was hit by a sniper through the stomach and wrist. I bandaged him up, then his Orderly endeavoured to carry him on his back and we got him about thirty yards when he was hit again through the stomach and he was then really to ill to carry on the back, then the Orderly got killed. I stayed with Jack until the Boche were into the village. His last words to me were, ‘You had better go now, tell Mother.’

Second Lieutenant Patterson managed to get back to the British line by crawling along an old drain, leaving the mortally wounded Captain Harvey with his dead Orderly. As there were only two British soldiers buried in Brouchy Churchyard, it is my belief that Private John Douthart, who had been with John Harvey in 12th Inniskilling prior to transferring to the 9th Battalion was John’s Orderly.

Efforts have been made through research and through a press appeal in local newspapers to try to identify any of John Douthart’s descendants with no success to date. Efforts in this regard will continue and if anyone reading this can assist, please contact the Inniskillings Museum in the first instance.

As highlighted by the Joint Casualty and Compassionate Centre, a moving re-dedication service was held on the afternoon of 21 March 2019 at Noyon New British Cemetery. I was delighted to attend and participate, representing the Royal Inniskilling Fusiliers Association and the Inniskillings Museum. 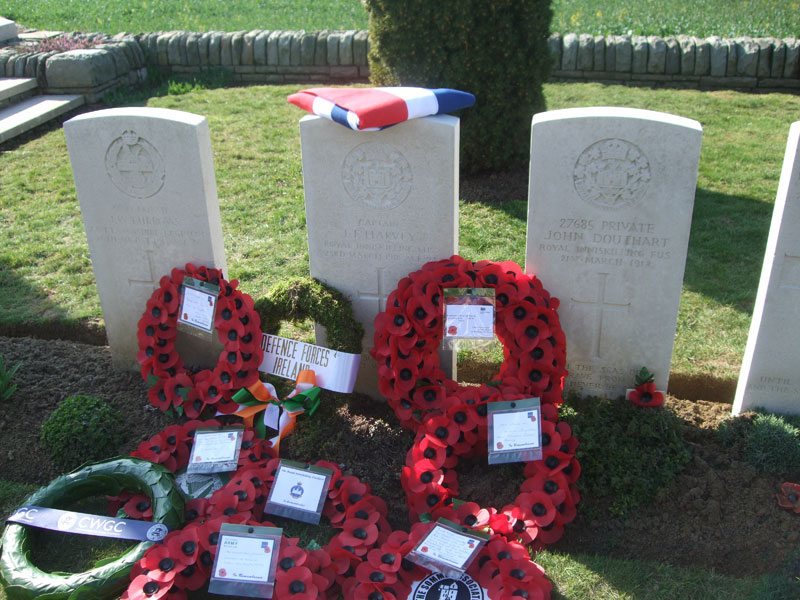 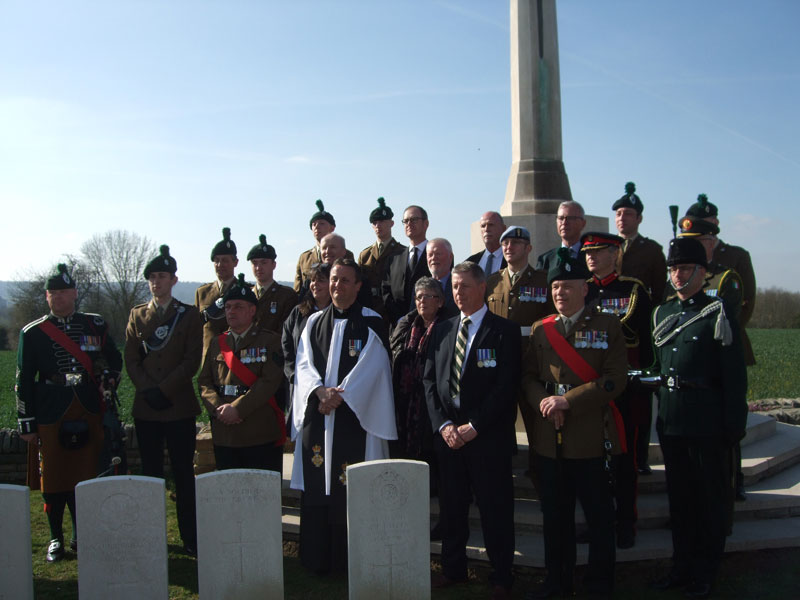 The original Commonwealth War Graves Commission headstone, identifying the ‘Unknown Captain’ has been obtained on loan from the CWGC and is on display at The Inniskillings Museum, Enniskillen Castle, Co. Fermanagh.

[2] At May St Presbyterian Church, John is identified as Forsythe Harvey and a Private in the Royal Irish Rifles. 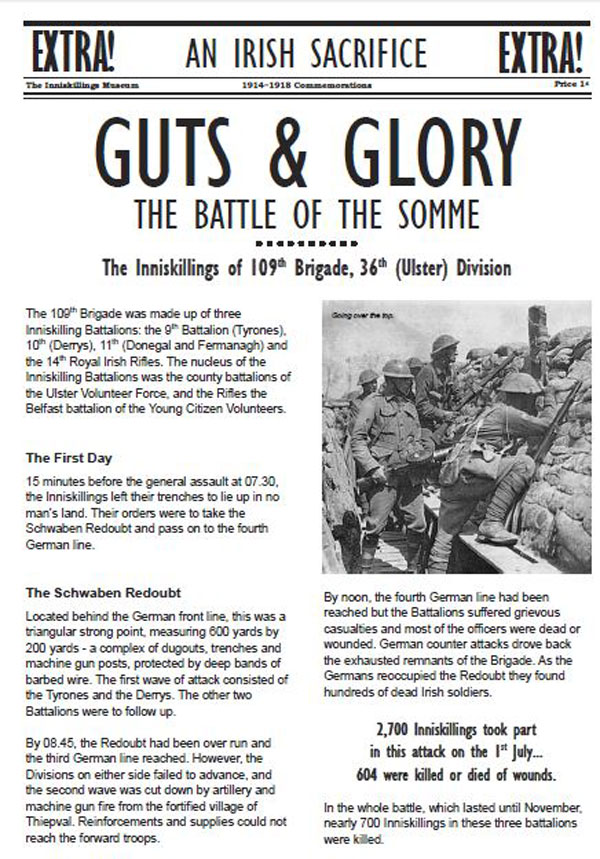 The Battle of The Somme 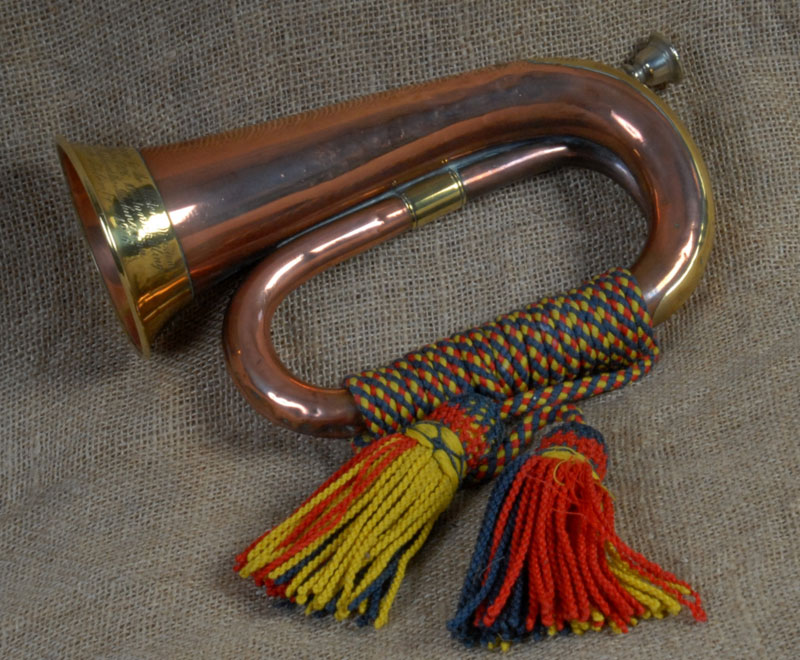 Somme Bugle to sound the ‘Advance’ 100 years on

On 1st July 1916, Drummer Jack Downs of the 10th Battalion, Royal Inniskilling Fusiliers, sounded the ‘Advance’ of the... 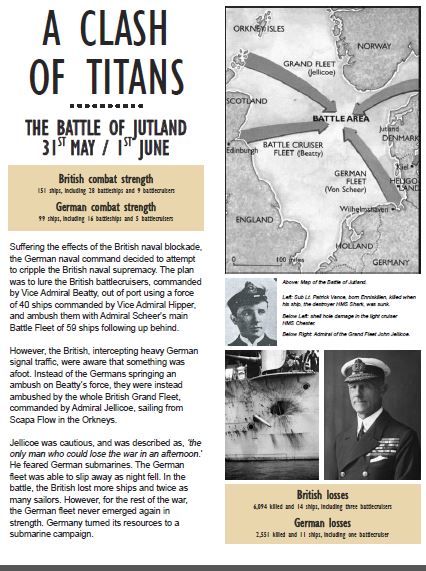 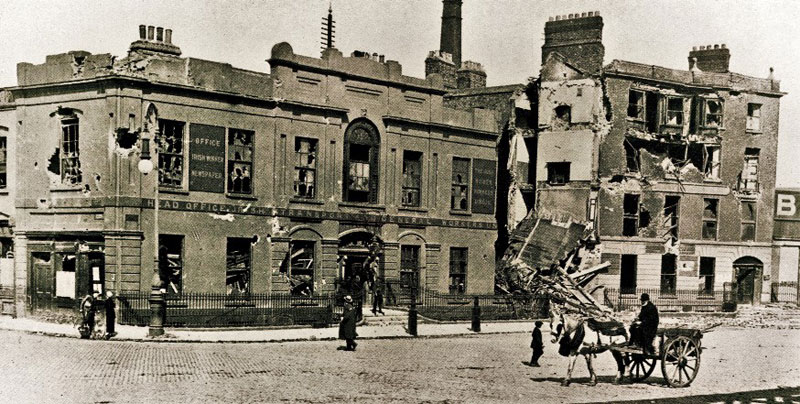 Irish homes in mourning. 41 Irish soldiers died in the Dublin Rising, and 581 in the Battle of Hulluch in France. Well...