When the Sinn Fein Rebellion broke out in Dublin on Easter Monday, the 24th April 1916, the Assistant Adjutant General, Colonel H.V. Cowan, in the absence of both the General Officer Commanding in Chief, Major General L.B.Friend, and his Brigadier General, General Staff, Brigadier General R.M.Greenfield (late Royal Inniskilling Fusiliers), requested immediate assistance from the General Officer Commanding the 15th Ulster Reserve Infantry Brigade, Brigadier General Hackett-Pain.   Apart from the fact that a 1000-strong battalion was immediately sent and arrived in Dublin at 1400 hrs on the next day, nothing much is known about its composition or organisation.  There is no mention of it neither in any of the Regimental histories nor indeed in the ‘Sprig of Shillelagh’, the Regimental Magazine of the The Royal Inniskilling Fusiliers.  However from casualty lists and awards made, some conjectures may be arrived at. 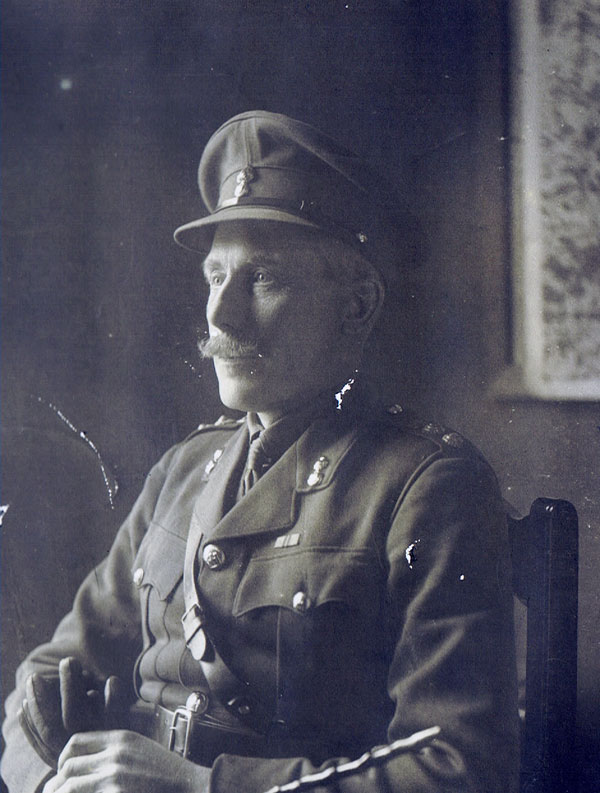 Lt Col J K McClintock, who commanded the Composite Battalion was one of seven Inniskillings who received decorations for ‘distinguished conduct in Dublin during the rebellion’

Lieutenant Colonel J.K. McClintock from Seskinore, Tyrone, the Commanding Officer of the 3rd Reserve Battalion of The Royal Inniskilling Fusiliers based in Londonderry, was presumably in command of this composite Battalion. as he was Mentioned in Despatches “for distinguished conduct in Dublin during the rebellion”.   The other units of The Royal Inniskilling Fusiliers based in Ireland at this time, were the 4th Reserve Battalion in Buncrana with its C.O. Lt.Col. Kimmana, the 12th Reserve Battalion in Enniskillen with its C.O. Lt.Col. J.Leslie and the Depot in Omagh under Lt.Col. Stewart.   At the time the rebellion broke out there was a detachment from the 12th Battalion under 2/Lt. T.Boston undergoing instruction at the Musketry School at Dollymount.  2/Lt. Boston was also Mentioned in Despatches for his conduct.

This Ulster composite Battalion detrained just short of Fairview Station as it was feared that the Irish Citizens’ Army had broken the line leading into Amiens (Connelly) Street Station.   It then marched in along the Drumcondra Road pushing in Sinn Fein outposts at Ballybough and Fairview, settling in for the night in the Custom House area covering Liberty Hall which was suspected to be a Headquarters for the rebels.  At about the same time, Captain Lord Dunsany, who had been on leave at home for the weekend, reported in to DublinCastle for orders.   He was told to join the composite Battalion but while en route, drove into a Sinn Fein road block and was shot, wounded and taken prisoner. Later however his companion was allowed to drive him to hospital where he received treatment. 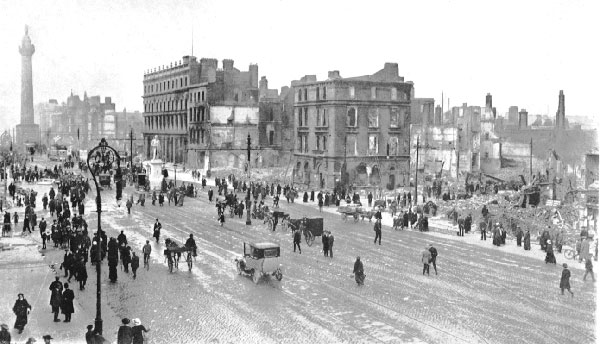 The destruction in Sackville (O’Connell) Street

On the Wednesday morning the Battalion was brigaded with the 3rd Reserve Battalion Royal Irish Regiment and the 5th Reserve Battalion Leinster Regiment, joined later on the Thursday morning by the 2/6th Reserve Battalion Sherwood Foresters whose Brigade had just arrived from England, with orders to cordon off the General Post Office area in Sackville (O’Connell) Street and then to retake possession of it.   By 0900 hrs. the Ulster Battalion had taken over a deserted Liberty Hall at the point of the bayonet and sealed off Lower Abbey St. and Eden Quay.   This attack was assisted by shell fire from HMS Helga II which had been brought up to St. George’s Quay. At 1400 hrs two of the 18 Pounders brought up from Athlone and based in TrinityCollege also started to bombard Sackville St. and Bachelors’ Walk from Westmorland St.

On the Thursday the Regiment had its first fatalities. 2/Lt. C.L.Crockett, aged 20, of Londonderry was shot by a British Army sentry near Fitzwilliam Street. He was later buried in Londonderry. Private F.W.W. Knox, aged 37, from Prehen, was also killed accidentally on the Thursday and is buried in Breandrum Cemetery, Enniskillen.   Meanwhile the cordon was being tightened around the GPO. Lt.T.J.Kennedy from Monaghan, who commanded the troops in the Pro-Cathedral area, was complimented by its clergy both on his own conduct and those of the troops under his command. He was later ‘Mentioned in Despatches’ for distinguished conduct.

On Friday the cordon around the GPO area was further tightened and at 1100 hrs on the Saturday the Brigade group was preparing for a final assault on the GPO building when Pearse, the leader of the Irish Volunteers, ordered a ceasefire, asking for negotiations. Thus the Rising was effectively over. 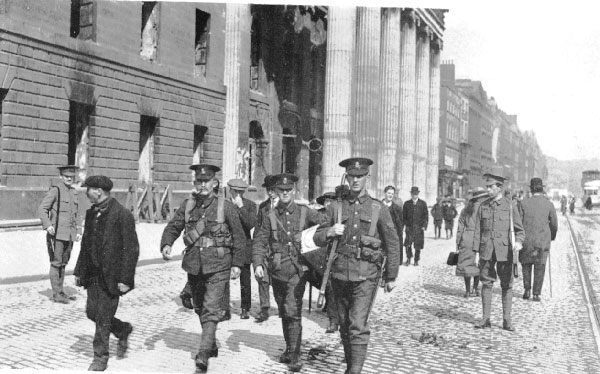 In addition to those mentioned above, the following members of the Regiment were wounded; Sergeants F.Hawkins and J.McAlonen; L/Cpl. P.Maguire; and Privates H.Ferguson, J.Foley, and F.Gerrard. Sgts. J.J.Beattie and G.Dixon were Mentioned in Despatches for distinguished service. Other ‘Inniskillings’ were also serving extra-regimentally in Dublin during Easter Week. Brigadier-General J.A.Byrne, born in Londonderry, was appointed Deputy Adjutant-General, Irish Command on the 27th. April and was Mentioned in Despatches “for distinguished service in suppressing the rebellion in Dublin”. Lt.Col. E.J.Buckley was the senior General Staff Officer at Kingstown (Dun Laoghaire) Garrison, having been invalided home from Gallipoli, and was also Mentioned in Despatches.

Since it has been said that the Officers in Irish Command “were either incompetent or infirm and usually both”, it may be of interest to mention a few other facts about them.

Maj.Gen. Friend was 64 years of age and had retired from the Regular Army in 1905.   Brig.Gen. Greenfield was 63, retired in 1909 and actually died during Easter Week, presumably from natural causes. Brig. Gen. Byrne was 40 and appointed the last Inspector-General of the Royal Irish Constabulary in August 1916. Col. Cowan was 64 and had retired in 1902. Lt.Col. McClintock was 56 and had been commanding the 3rd Battalion since 1909. Another point to be born in mind is that nearly all the troops involved were in Reserve Battalions and were thus either undergoing training, recuperating from wounds, not fit enough for a more active roll, or training staff. In the latter case, the previous two categories probably also applied.