A LASTING LEGACY TO THE INNISKILLINGS IN THE GREAT WAR

The Very Reverend Kenneth Hall and the Select Vestry of St Macartin’s Cathedral in Enniskillen recently invited the Inniskillings Museum to commission a commemorative stained glass window in the Regimental Chapel in honour of all those who served in the Great War, both in the Royal Inniskilling Fusiliers and the 6th Inniskilling Dragoons. The window will commemorate not only those who died, but also those who survived as well as their families, some facing a lifetime of physical and psychological trauma.

The Great War was only the third occasion that both Inniskilling regiments shared the same battlefield since they were raised. One hundred years later, this commemorative window will be a lasting legacy to the contribution made by our two famous regiments in ‘the war to end all wars’. The window will be dedicated on Friday 1st July 2016 at an evening service to commemorate the anniversary of the Battle of the Somme.

Commenting on the project, Dean Hall said “The men and women who fought for their country are to be honoured with gratitude; they gave their lives for a cause they believed to be true, and by installing this commemorative stained glass window we remember their sacrifice, but also we need to remember the effect that that has had on so many who fought and survived and had to live with varied and mixed emotions. War endeavours to bring peace and justice, but true peace can only be found in the God of Peace in whom we should place our trust and in whose name this window will be dedicated”. 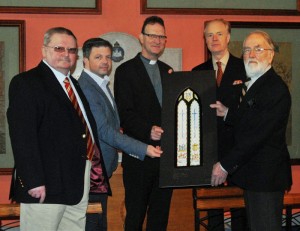 On Friday 8th April the Inniskillings Museum officially launched a public appeal in St Macartin’s Cathedral seeking support for this unique commemorative project. If you would like to make a donation to this once-in-a-lifetime project please visit the museum’s website:

Alternatively you can donate to this appeal by posting a sterling cheque or postal order (made payable to THE INNISKILLINGS MUSEUM) to The Inniskillings Museum (stained glass window appeal), Enniskillen Castle, Enniskillen, Co Fermanagh, Northern Ireland, BT74 7HL. The target is £6,000 and with less than 12 weeks remaining until the 1st of July commemorations the Inniskillings Museum would greatly appreciate your prompt reply to this appeal.

Ronnie Tiernan and Mark Scott, representing the Regimental Associations of the 5th Royal Inniskilling Dragoon Guards and the Royal Inniskilling Fusiliers concluded “We hope everyone will support this worthy memorial, which will recognise the suffering and sacrifice not only of the fallen, but also of those who returned and their families”.