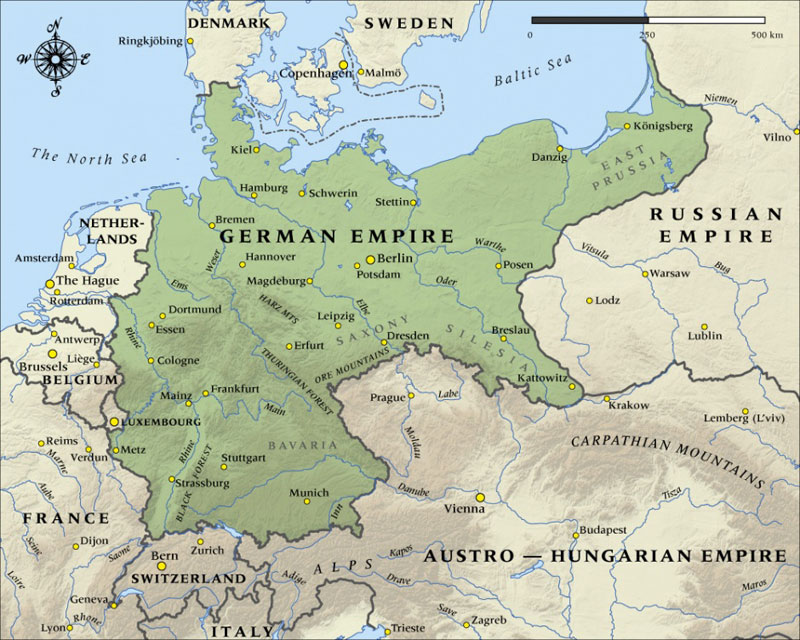 After the end of the First World War, the Paris Peace Conference allowed ethnic peoples who had been part of the German, Austro-Hungarian and Russian Empires to declare independence.

In areas where there were significant mixed populations, arrangements were put in place for plebiscites (referenda) to be held to determine where the new frontiers should be.

One such place was Upper Silesia, originally part of the German Empire, but now on the frontier with the new Republic of Poland.  Germans and Poles lived there in roughly equal numbers, but most significantly, on the eastern frontier was an area of extensive natural resources of coal and iron which Poland was keen to acquire. 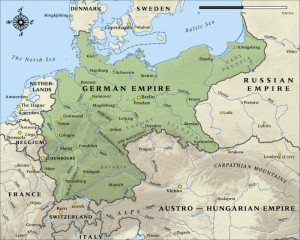 The German Empire in 1914, showing Silesia

A plebiscite was arranged for March 1921 by an Inter Allied Commission which had been set up in 1920.  There had been rising tension between Poles and Germans in the preceding years and a lot of violence between German irregular units, called Freikorps, and Polish insurgents. Allied soldiers, mainly French, tried to keep the peace. 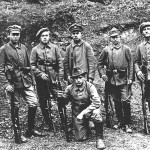 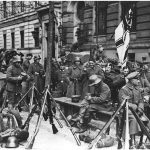 The outcome of the plebiscite was a majority vote to stay in Germany.  In May, a serious uprising began among the Poles.

An inter-allied force of more soldiers, 20,000 British, French and Italian troops, was sent to Upper Silesia to separate the two sides and allow diplomatic efforts to take place to find a solution to the problem.

The British force, called the British Upper Silesian Force, began to arrive in July 1921, and consisted of two understrength brigades, mostly of Scottish and Irish battalions.  The latter were The Royal Irish Regiment, The Royal Inniskilling Fusiliers, The Connaught Rangers, The Leinster Regiment, and The Royal Munster Fusiliers.

The Inniskillings sent 23 officers and 320 Other Ranks. 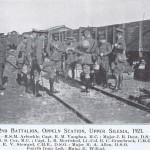 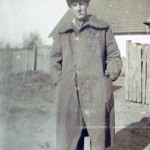 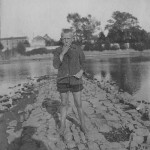 Their first billet was in the town of Oppeln, (now in Poland) in a camp of wooden huts called Camp Foch.  They spent three months there in not very comfortable surroundings, mud and rats adding to their discomfort. An officer commented that the only effective remedy was to burn the whole place down. 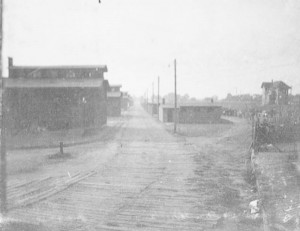 The town was not much better, revealing not much except dirt and stagnation.

Detachments were sent to various outlying areas.  The main idea was to prevent smuggling and irregular traffic of any kind. 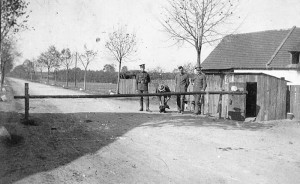 Frontier post between Germany and the newly created Republic of Poland

The Battalion then moved to Rosenburg (Olesno, Poland) where the men were housed much more comfortably in schools, hotels and large houses.  As winter set in, they had the new experience of learning to ice skate. 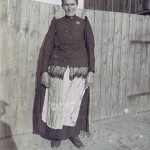 Frau Neidzwiedz, Lt Crossle was billeted in her house 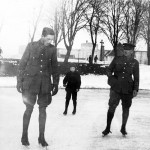 On 18th December, a detachment of 20 men and one officer was sent to assist in the evacuation of a Polish refugee camp. Their arrival was unexpected with no accommodation or food available.  Eventually they were given three rooms and a kitchen in a local castle. But when they arrived at the camp they found that the refugees had decamped across the border into Poland. 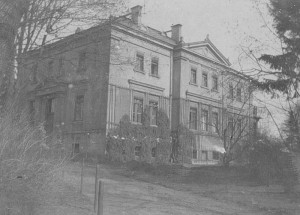 Schloss Guttentag, where Lt Crossle and his unit were billeted

Generally speaking, the Irish soldiers were considerably outnumbered by Polish insurgents, and had to rely on diplomacy, good humour and occasional threats.  They found passions on both sides inflamed to unbelievable degrees of hatred and mistrust. Each side accused the allied soldiers of favouring the other.  An uneasy peace was achieved. 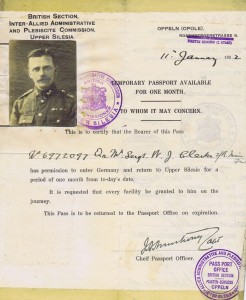 Temporary Passport for QMS Clarke, from Castlederg. He served in 2nd Bn throughout the war and gained a bravery award

The Silesian problem was handed over to the League of Nations and a partition of Upper Silesia was agreed, which gave most of the industrial area to Poland.

41 British soldiers died during the deployment, none in active combat.  They died from disease, illness, suicide, accident and murder. Four Royal Irish soldiers were killed in their barracks by an unhinged colleague.

Two Inniskillings died when on service in Silesia, L/Cpl Andrew Kelly, 6973846 and L/Cpl Nathaniel Murdock 6973193. Andrew Kelly was born in Coleraine, and enlisted in 1st Battalion in 1912.  He served in Gallipoli where he was wounded.  He was accidentally killed in Rosenburg on 24th March 1922. 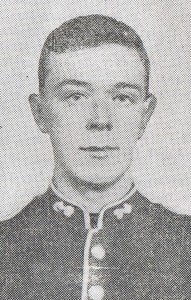 Nathaniel Murdock was born in Belfast, enlisted as a regular and served during the war with the Royal Irish Rifles and the Labour Corps. In 1919 he joined the Inniskillings with the rank of Lance Corporal.  He died in Oppeln on 27th December, 1921.  It is not known how he died.  They were buried in the cemetery in Oppeln.

On 28th March 1922, after inspection by the GOC Allied Forces and the GOCs of French and Italian troops, the Inniskillings entrained for Cologne, a journey of 50 hours, and on to Dover. 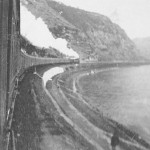 The journey home, view of Rhine from train to Cologne 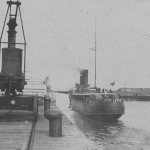 Departure from Ostend to Dover

During the period September to November 1922, the 2nd Battalion was disbanded.