Unique collection of memorabilia belonging to an exceptional soldier.

There is a collection of medals, walking stick and photograph in a framed oblong case at the back of the Boer War display in the museum. It would be easily passed unnoticed by most visitors; but it tells a story without equal! The photograph shows a small elderly man, who is a Lance Corporal in the Royal Inniskilling Fusiliers. He has an extraordinary number of good conduct stripes on his sleeve.

Edward Pierce was born in Dublin in and about the year 1846. This was a significant date in Irish history as it was the year before the Irish Potato Famine, called the ‘Great Hunger’. He was brought up in Portsmouth, Hampshire. His father was Henry Pierce who may have left Ireland with his family to escape the ravages of the famine.

Edward enlisted at Fareham, Hampshire on the 31st August 1866. He joined the 108th Regiment of Foot, then stationed at Portsmouth. He went to India in a draft on the 9th March 1868 joining the Regiment in Madras. He came back to Britain with the Regiment to Colchester in 1876; he served in Portsmouth until 1879 and in Preston for two years until 1881. The 108th Regiment were then posted to Enniskillen, Northern Ireland and it was at this time the 108th Regiment became the 2nd Battalion of The Royal Inniskilling Fusiliers under the Cardwell reforms.

He again moved abroad when the regiment went to Malta for five months in December 1885; returning to Aldershot.

His third trip east was to India again in 1888, during his time in India he served in the Tirah Campaign, which was fought in the same area as the present conflict in Afghanistan. A contemporary photograph shows him in full kit. 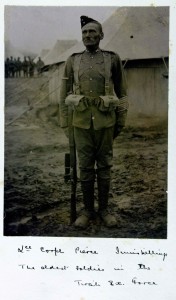 He then served in the Boer War and Egypt, returning to Dublin in 1908. At the outbreak of the First World War he was sent to the Regimental depot at Omagh, County Tyrone, where he remained until 1923.

As the end of his long service of almost 57 years the Regiment was concerned about his future as he was now well in his seventies. The Royal Hospital in Dublin was no longer available because of British withdrawal from the Irish Free State. Application was made by the Regiment on his behalf to The Royal Hospital in Chelsea; Dutchy was accepted and proudly wore the Pensioners uniform.

The walking stick on display was presented to Lance Corporal ‘Dutchy’ Pierce by the Warrant Officers and Sergeants of the Depot in recognition of almost 57 years of service.

The medals in the case are the India Medal 1895 with Tirah and Punjab Frontier clasps; The Boer War Queens South Africa Medal with Transvaal and Orange Free State clasps; the 1911 Coronation Medal for King George V and the Long Service and Good Conduct Medal.

Lance Corporal ‘Dutchy’ Pierce held the record for continuous service in the British Army. He Never incurred any disciplinary entry as far as can be ascertained.