You Are Here | Home 9 Museum 9 About the Museum 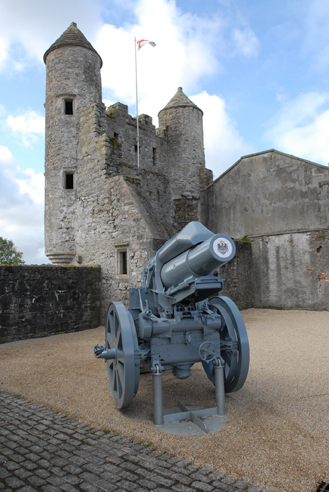 The idea of a regimental museum was first raised in the editorial of the regimental journal ‘The Sprig’ in the summer of 1929 and two years later, in 1931, the Regimental Depot Museum of the Royal Inniskilling Fusiliers was founded.

Fast forward to a Regimental Dinner on the 14 March 1959 where the Major of Enniskillen gave an interesting resumé of the history of the Borough and its Regiments, and of the negotiations which resulted in a definite decision to install the Regimental Museum at the Old Castle Barracks in the birth-place of the Inniskilling Regiments.

At the same time the War Office also ‘agreed in principal’ to the idea of establishing a regimental museum in Enniskillen, and the official sanction and a grant for the move soon followed.

However relocation was to take ten years to allow for restoration and repairs of the Keep.

And so, 38 years after it was founded and 10 years after the idea of a move was agreed, the collection returned home to its birthplace when the regimental museum officially opened its doors at Enniskillen Castle on Wednesday 28th May 1969.

The museum has accumulated a rich collection since its foundation in 1931, but the vision to move to Enniskillen Castle, the birthplace of our regiments, created a unique experience.

Instantly we became a Collection with a Connection, and very few regimental museums across the UK and Ireland can stake such a claim. It is a compelling connection stretching back 330 years since the regiments were raised in 1689.

Today the Inniskillings Museum cohabits the castle with Fermanagh County Museum (owned by Fermanagh and Omagh District Council), with which it shares joint ticketing, opening hours and marketing.

The purpose of the Inniskillings Museum is laid down in the Trust Deed.

“In the context of the history of the British Army, to maintain and develop an accredited museum to hold together and perpetuate the deeds, history, traditions and collections of the Inniskilling Regiments and their successor Regiments, for the learning and inspiration of the wider community.”

The museum is proud to be a recipient of The Queen’s Award for Voluntary Service. This is the highest award given to local volunteer groups across the UK in recognition of outstanding work done in their own communities – it is the MBE for volunteer groups.

The museum is accredited with the Northern Ireland Museums Council and is subject to the Royal Inniskilling Fusiliers Museum Charitable Trust, governed by a Board of Trustees and registered with the Charity Commissioners for Northern Ireland.

The Trust Deed gives the Board responsibility for the care of the collections and the funding of all exhibitions, acquisitions, activities and events, while the Ministry of Defence supports the facilities management of the museum.

The museum assists Army Heritage Branch to promote interest in the Army in general and The Royal Irish Regiment in particular as the serving successor to the Inniskillings.

Today, the Inniskillings Museum collection and our compelling connection with Enniskillen Castle is the golden thread that runs through everything we do as we continue the endeavours and vision of those that have gone before.