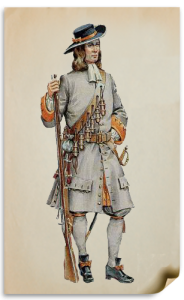 In 1688 the inhabitants of Enniskillen took up arms in defence of their town against the threat of occupation by the forces of James II. The troops so raised, The Inniskillingers, Foot and Dragoons, were not content to sit passively behind the walls of their town but made repeated expeditions into the surrounding district to seek out and destroy the enemy. So successful was this force it was incorporated into the army of William III, in which the Foot became “The Inniskilling Regiment”, its Colonel being Zachariah Tiffin, and as such it fought at the Battle of the Boyne. After the close of the Irish war the Regiment next saw service in the Low Countries, where it was present at the siege of Namur in 1695, and during the next half-century it was stationed in places as widely separated as the West Indies, Minorca and Spain. In 1745 it took part in the Battles of Falkirk and Culloden where the Young Pretender, Prince Charles Edward Stuart, was finally and decisively defeated in his attempt to regain the throne of his forbears.

In 1751 the system of numbering Regiments was introduced. Before this they had been known by their Colonels’ names, a practice that was liable to lead to confusion. The Inniskillings became the “Twenty-seventh Regiment”, but were, however, invariably referred to as the “Twenty-Seventh Inniskillings” even in official correspondence, their ancient and genuinely “territorial” title, the oldest in the infantry of the Line, being thereby preserved. 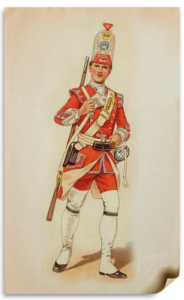 During the Seven Years war (1756-63) the Regiment fought against the French in North America and the West Indies. In 1778 it returned to North America to take part in the War of Independence, but as the result of the alliance formed by the French with the American colonists, it again found itself involved in numerous expeditions against the French West Indian possessions. The war with France came to an end in 1783 but broke out again ten years later and in 1796 the “Twenty-seventh” won one of its most prized battle-honours, “St. Lucia, 1796”, where its Regimental Colour was displayed on the flagstaff of the captured fortress for one hour prior to the hoisting of the Union Flag, a distinction accorded to no other Regiment before or since.

Its travels during the next few years included the Low Countries and Egypt where it formed part of Sir Ralph Abercromby’s force that fought the Battle of Alexandria against the French in 1801, while the Second Battalion, which had been raised in 1800 formed part of the garrison of that city after its capture. 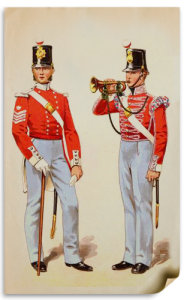 The First Battalion of the 27th distinguished itself at the Battle of Maida in Southern Italy in 1806, and together with the Second and Third Battalions formed part of the Peninsula Army, which under the Duke of Wellington cleared Spain and Portugal of the French between the years 1809 and 1812, and finally entered France in triumph. There is not space enough here to recount all the details of the Regiment’s doings in the campaign but the names ‘Badajoz’, ‘Salamanca’, ‘Vittoria’, ‘Pyrenees’, ‘Nivelle’, ‘Orthes’ and ‘Toulouse’ emblazoned on the Colours are sufficient testimony that it played a not undistinguished part therein.

The 27th was the only Irish infantry regiment (out of eight in the army) to fight at the Battle of Waterloo on the 18th June 1815, where the Emperor Napoleon was finally overthrown and his dreams of world-domination dispelled forever. It is perhaps its most cherished battle-honour as there it held a position of vital importance against great odds the whole day and in after years was acknowledged by the Duke of Wellington to have saved the centre of the line.

After a period of peace it found itself in South Africa where between 1837 and 1847 it was engaged in several of the numerous native wars that occurred during those years. From 1854 and 1868 it served in India taking part in the suppression of the Indian Mutiny and helping to preserve law and order in North-West India. 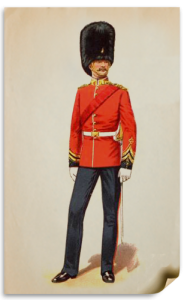 In 1881, as a result of the reforms begun in 1870, the “Twenty-Seventh” became the First Battalion Royal Inniskilling Fusiliers and a Second Battalion (descended from an East India Company Regiment, the Third Madras Europeans, later the Hundred and Eighth Regiment of the Queen’s Service) came into being; at the same time three Regiments of Irish Militia became the Third, Fourth and Fifth Battalions.

The Second Battalion saw service in the great uprising of the Pathan tribes in the Tirah Valley on the North-west frontier of India in 1897-98, and after the end of that campaign remained in India until January 1902 when it was sent to South Africa to take part in the closing stages of the Boer War. The First Battalion reached South Africa in November 1899 and was part of General Buller’s army sent to lift the siege of Ladysmith. Its first actions were at the battle of the river crossing at Colenso. Some months later, at Inniskilling Hill, the battalion’s Medical officer was awarded a Victoria Cross for rescuing a wounded officer whilst under heavy enemy fire. From late in 1901 to the end of the war in 1902 the battalion constructed and occupied numerous sections of the “block-house line” which divided the country into large areas surrounded by wire with fortified posts at intervals. Within these areas mounted troops drove the Boers on to the wire fences, where, being caught between two fires, they were forced to surrender.

The Great War which started in August 1914, found the First Battalion in India and the Second in Dover, the latter going 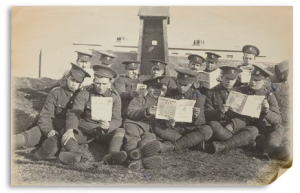 to France in the Fourth Division which was amongst those to be heavily engaged at the Battle of Le Cateau. The First Battalion was part of the “Incomparable” Twenty-ninth Division which won undying fame at the landing at Helles on the Gallipoli peninsula in April 1915, and later on the Western Front. Nine New Army battalions were raised during the war all of which took part in the great battles in France and Flanders between 1915 and 1918, while two of them saw much service in Gallipoli, Macedonia and Palestine as well. During those eventful years the Regiment was awarded eight Victoria Crosses. 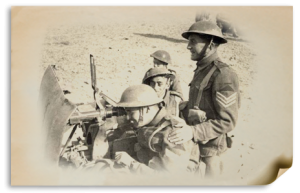 The New Army battalions were disbanded after the war, a like fate overtaking the Second Battalion in 1922. Between 1919 and 1934 the First Battalion was stationed both at home and abroad in India, Iraq, Shanghai and Singapore, and when the Second World War started was again in India. The Second Battalion which had been re-formed in 1937, was at Catterick, and went to France in the British Expeditionary Force as it had done twenty-five years before, being amongst the troops to be evacuated from Dunkirk in 1940. In 1942 the First Battalion was flown to Burma to help stem the Japanese advance and in 1943 took part in the operations in the Arakan peninsula. After re-fitting, the Second Battalion as part of the Fifth Division, left England in 1942 on a journey that was to include Madagascar, India, Iraq, Persia, Syria, Lebanan, and eventually arrived in Egypt in time to do its share in the conquest of Sicily. The Sixth Battalion, in the 38th (Irish) Brigade, landed in North Africa in the same year and after the defeat of the German Armies there, went on to join in the invasion of Sicily. After the successful completion of this operation both the Second and Sixth Battalions landed in Italy where the Allied Armies were continuing their advance. In July 1944, the Sixth Battalion was disbanded, its place being taken by the Second which, when the war ended was sent to Austria on garrison duty, being disbanded in 1947.

After the war the First Battalion returned to India from Burma and after a stay in Hong Kong was engaged for many months hunting terrorists in the jungles of Malaya. In 1949 after a brief spell at home it went to the West Indies returning to the United Kingdom in April 1951. In 1952 it was presented with the Freedom of Enniskillen, the town of its birth and later in the same year went abroad to the Suez Canal Zone and afterwards to Kenya where it helped to suppress the Mau Mau terror; while in the latter country it received the Freedom of Nairobi in perpetuity, the first and so far the only time that a British Regiment has been so honoured by a colonial city.

The Second Battalion was raised again in 1952 and after doing duty in the Suez Canal Zone and Cyprus finally disappeared in 1956. 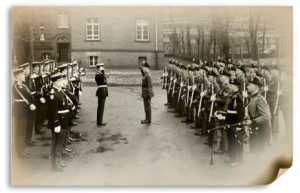 From February – October 1964 the 1st Battalion flew to Cyprus where they became part of the United Nations Peace Force.  From Gravesend they moved to Berlin in September 1965 before returning to Worcester in October 1967.

In April 1968 the 1st Battalion had its final operational deployment when Tactical Headquarters and B Company were ordered at short notice to Bermuda with trouble brewing on the Island due to a tense political situation. Following a peaceful election the detachment returned to Worcester in preparation along with the remainder of the Battalion for the final Regimental Chapter and at midnight on 30th June 1968, following a nostalgic ceremony the Regimental Flag was lowered for the last time.