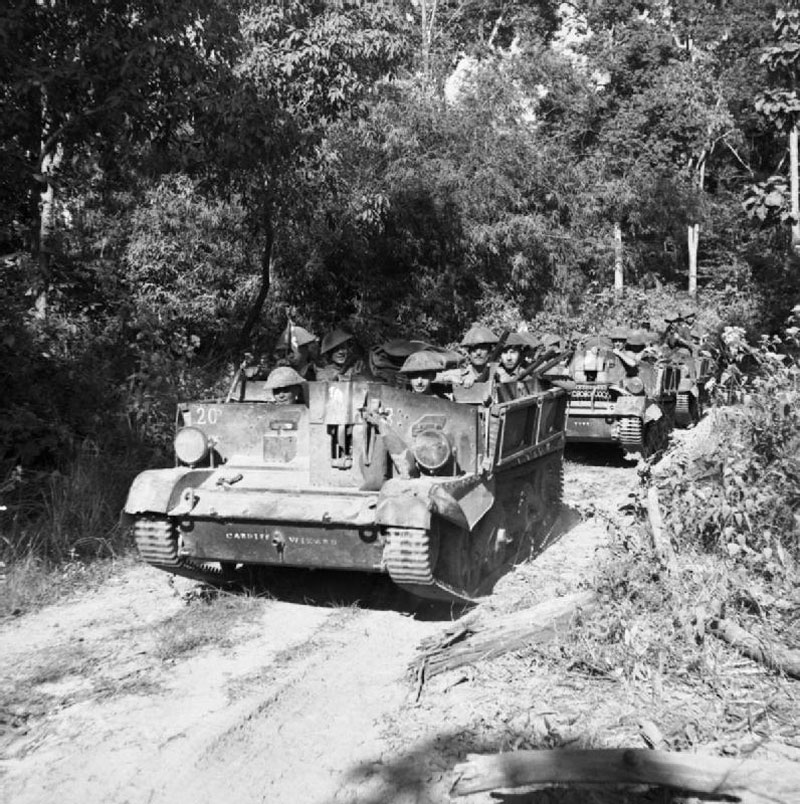 75 Years Ago the Inniskillings Suffer a Second Bloody Nose in Burma.

In January 1942, the army of Imperial Japan invaded the British possession of Burma. The British and British Indian army forces were out flanked, defeated and were forced to evacuate Burma.  The Inniskillings had been flown into Burma as part of an unsuccessful attempt to create a defensive line north of Rangoon. It failed, and the order to evacuate Burma was given and India itself was now threatened. 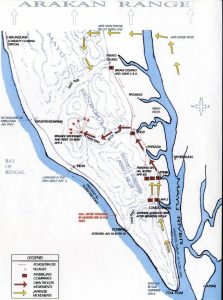 The objective was the Japanese naval and air base on Akyab Island which lay at the end of the Mayu Peninsula. This consisted of a narrow, steep and jungle covered range of hills which separated the narrow coastal plain on the Bay of Bengal from the fertile rice growing valley of the Mayu River. Two roads skirted the Mayu peninsula.  On the western side, a good coastal road led along the Bay of Bengal towards the Japanese base at Donbaik north of Akab.  On the eastern side another, less good, road led along the foothills skirting the Mayu River. 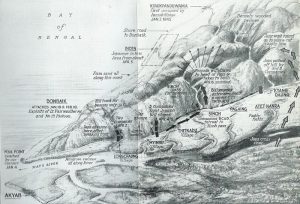 The capture of Akyab would provide the base for all operations against the Japanese flank.  A plan for a sea born assault had to be abandoned because sufficient naval forces, particularly landing craft, were not available.   Instead a land based attack down the Mayu peninsula was put in place.  (Reminiscent of Gallipoli!)

This was to be carried out by 14th Indian Division, commanded by Mayor General WL Lloyd.

In this Division were the Inniskillings in 47th Infantry Brigade, with two other battalions, 1st Battalion, 7th Rajput Regiment and 5th Battalion 8th Punjab Regiment. 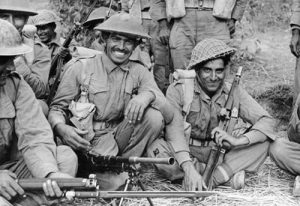 On 4th January, probing reconnaissance by an Inniskilling patrol a few days earlier had reached the end of the road and saw little sign of the Japanese.  It was to transpire very shortly that they had remained hidden.

Further patrols were sent to the east side of the peninsula and again saw little sign of the enemy.  One of these patrols, led by Captain Coates, approached a village which was protected by an unfordable watercourse. The village was occupied by some Burmese guerrillas.  Coates ordered his men to strip and swim across the river with covering fire provided by Bren guns.  The enemy fled pursued by the naked Inniskillings! 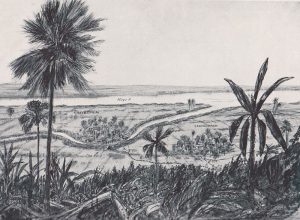 The first attack on Donbaik was by 47th Brigade on 7th– 9th January.  The attack was repulsed. The Japanese defensive bunkers could not be penetrated by field artillery.  When eight Valentine tanks were bought up for another attack, even they failed. Three Inniskillings were awarded medals for gallantry during the February attack. Corporal John Scott was awarded the Distinguished Conduct Medal and Fusilier William Newman the Military Medal.  Under sustained enemy fire they successfully recovered a damaged carrier, (a light armoured tracked vehicle) thus preventing it from falling into enemy hands.

Lieutenant Basil Fairweather was awarded the Military Cross for successfully leading his section against a Japanese position and then defending it against heavy counter-attacks for 20 hours. A fourth Inniskilling, Corporal Daniel Denton was awarded a Military Medal for, on both occasions, while under enemy fire, rescuing badly wounded comrades. 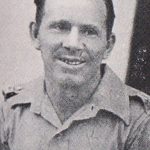 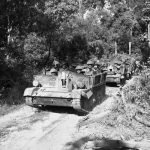 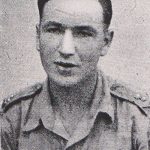 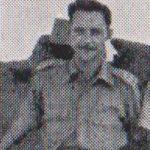 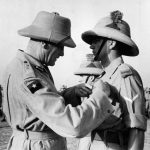 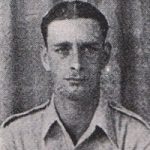 After all attacks on these well-constructed Japanese defences failed, attention turned to the eastern side where attempts were made to move south through swampy and difficult terrain.  By now Japanese reinforcements were arriving, commanded by Lieutenant General Takeshi Koga. 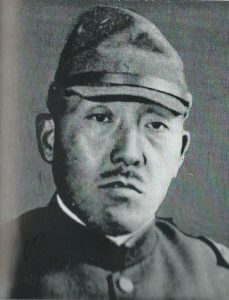 On 10th March, the Inniskillings, with the 5/8 Punjabs and 1/7 Rajputs in 47th Infantry Brigade, moved across the Mayu hills to the east side, where they were deployed holding the villages of Sinoh, Thitkadu, Minbu, Pagaing and Atet-Nara.

On 24-26 March, the Japanese crossed the Mayu River and gained the hill tops.  The right flank of the Inniskillings became exposed as Japanese units began infiltrating the villages.

On 30th March, withdrawal order was given towards the Sinoh Pass. ‘B’ company was ordered to withdraw from its precarious position near Kyang Daung. Its rear party, led by Lt Lister, stayed on for 30 minutes firing everything they had to deceive the enemy, enabling the rest to withdraw, and then they successfully extricated themselves. Other units were under constant attack. Between 26th and 31st March, ‘C’ company was shelled over open sights, and the Japanese tried to set fire to forward positions by means of explosive bullets.

The Battalion was ordered to take up defensive positions on the top of the Sinoh Pass. By 2nd April, the Battalion, alongside the 5/8Punjabs and 1/7 Rajputs, occupied the area of Conical Hill/Thitkado.

On 4th April, the Japanese attacked in strength again and again until they had broken through. Lt Lister killed about five Japanese before he was finally bayoneted. Units were surrounded and, those who could, withdrew to the Sinoh Pass.

Fusilier William Megarry was awarded the Military Medal, when during this retreat, and under sustained enemy fire, he rescued a badly wounded Fusilier and carried him to the Regimental Aid Post. 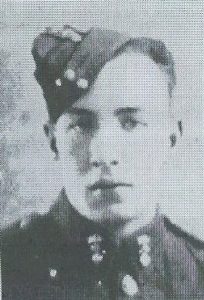 By 6th April, a disorderly withdrawal was now across country over jungle covered hills with speed reduced to ½ mile per hour.  When darkness fell, direction was kept by touch only.  The Battalion had to split into small forces and had to hide up during the day to avoid Japanese patrols.   The parties made for the beach south of Indin.  Casualties were high from Japanese ambushes and prisoners were taken.  The remains of the Battalion were moved to staging camps and then were transported by motor transport to the north across the border into India.

Patrick was captured in April 1943 and subjected to a rough interrogation.  He was made to carry food and ammunition for enemy front-line troops.   During a heavy rainstorm, he slipped away from his captors.  After wandering for two days in the jungle he was captured again.   As before, he was roughly treated and made to carry supplies.  Determined to escape again, just before dark he persuaded a sentry, on pretence of needing to relieve himself, to take him to a secluded spot.  Once there, he attacked the soldier, knocked him to the ground and gave him a severe kicking about the head.  He slipped away into the jungle and walked about three miles to the British lines.   For his initiative and determination, Patrick Maguire was awarded a Military Medal. 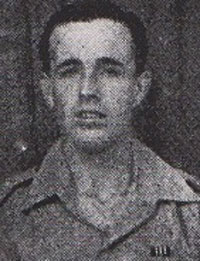 In January 1943, Battalion strength was 600.  By 5th April, it was 230.  Some 270 were dead from enemy action and disease. Others were wounded, taken prisoner or missing.

In the Second World War in India and Burma some 425 Inniskillings died from enemy action and disease.

The following are some of the artefacts from the Burma campaign on display in the Inniskillings Museum: 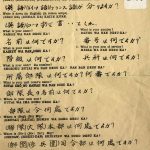 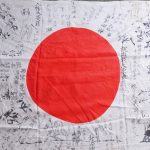 Japanese Flag, with both Japanese signatures and those of Inniskillings who captured the flag. (Inniskillings Museum collection) 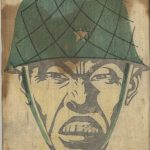 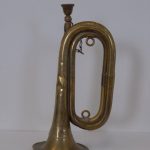 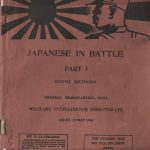 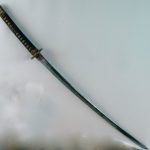