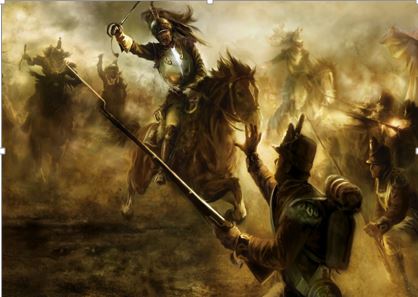 This sword was re-discovered in a chest of bayonets, sabres and other swords in the Inniskillings Regimental Museum and was considered worthy of a little restoration and research as we approach the 200th anniversary of the Battle of Waterloo on 18th June 2015.

The French Cuirassier’s derived their name from the cuirasse, the iron and brass breast and back plate they wore.  They were the heavy cavalry and had a fierce reputation in battle – said to ‘eat cannonballs for breakfast’.  They were recruited for their big, strong physique, mainly from farming stock. A popular myth emphasised their manliness.  Officers were given 3 horses, 3 bottles of champagne and 3 willing girls.  They had 3 hours to kill the champagne, cover the girls and ride a 20 mile course.  (Of course they could choose their own schedule of events.) 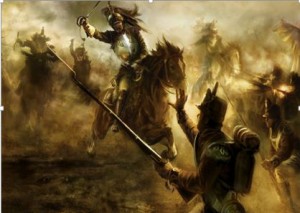 In battle they formed up in two ranks abreast.  The front rank moved forward at a trot, breaking into a canter and then a full gallop with their swords extended forward like lances.  They struck terror in the front line of infantry and, before the foot soldiers could reload, the second rank charged. Infantry would form squares, three or four ranks deep, and successfully fend off such charges.

Manufacturing the Cuirassier Sword began in 1800 in the village of Klingenthal in the east of France near Strasbourg.  By 1815 there were over 600 workers in the factory and by 1817, some 70,000 blades had been forged.

The straight spear pointed blade was double fullered and measured 38 ¼” x 1 3/8”. The sword and scabbard weighed 5 lbs 4 ozs. It was made to a very high uniform standard and each blade was checked by a government Reviseur overseen by a Controleur. They stamped the blades with their marks or poincons. 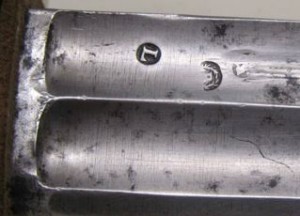 On completion the back of the blade was engraved with cursive writing.

In 1802, it was decided that 50% of the blades would be sent to the Nicolas Boutet Arms Factory in Versailles, Paris to have the hilts fitted. 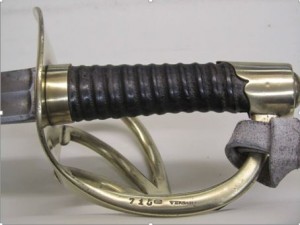 The hilt was wrought from a mixture of arco (mixing copper, coal and zinc) and bronze from cannons.   The grip handle was made of wood, covered in leather and bound with 12 spirals of twisted brass wire.  A white leather strap or ‘knot’  was attached to the hilt. This knot went round the cuirassier’s wrist and secured the sword in battle.

The scabbard was made from sheet iron with a mouth piece designed to focus the blade and secure it in place. The drag or foot of the scabbard was lyre shaped.

Each scabbard was stamped with an individual rack number  (639).  This number would normally be the same as the sword rack number. 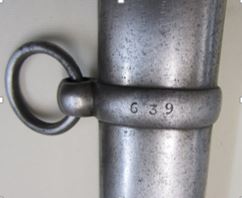 This sword will be on display in the regimental museum as part of an exhibition of the Battle of Waterloo.