‘The Skins’ March Into History 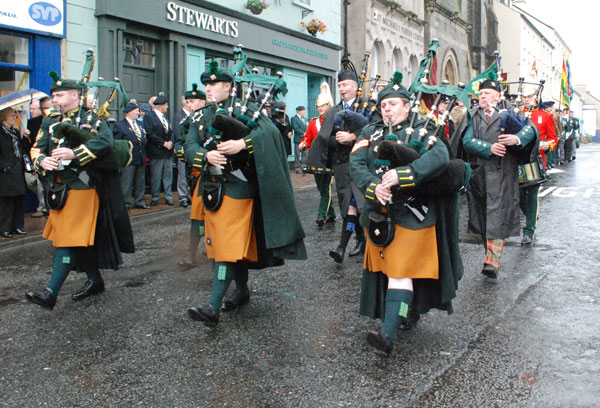 In a moving ceremony at St Macartin’s Cathedral, Enniskillen, the famous Standard of the 5th Royal Inniskilling Dragoon Guards was officially ‘laid up’ on Sunday 20 October 2013, ending more than three centuries of service and sacrifice around the world.

Standards were once a rallying point on the battlefield, paraded before the troops so that all could recognise them. They are consecrated before being taken into use and, after service, are laid up in sacred or public buildings. 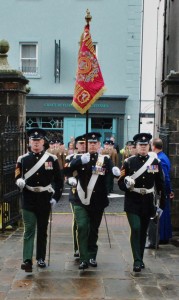 Affectionately known as ‘The Skins’, the regiment was originally formed to fight in the Williamite wars but survived to earn battle honours from the early 18th century, through the Crimean and Napoleonic campaigns, right up to the Korean War in the 1950s.

Serving members of the RDG, having just returned from their second tour of duty in Afghanistan, paraded to St Macartin’s along with members of ‘The Skins’ Old Comrades Association for the 11am service. 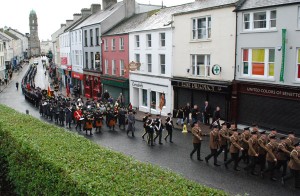 Dressed in their scarlet coats, three Chelsea Pensioners also travelled to Enniskillen for the ceremony, including Sam Cameron who served with the regiment for three years. 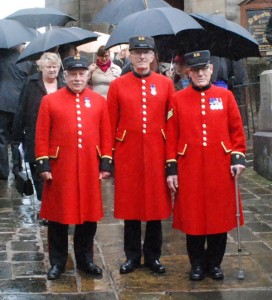 Based in Catterick, North Yorkshire, the modern day Dragoon Guards is an armoured cavalry regiment recruited mainly in Yorkshire, Cumbria and on both sides of the Irish border which has been instrumental in the ongoing military operation in Afghanistan. They are currently preparing to move from tanks towards becoming a reconnaissance force.

Throughout the centuries, a number of historical figures have served with the Inniskilling Dragoons, including Boy Scouts movement founder Lord Baden-Powell and Captain Lawrence Oates who famously sacrificed himself in the hope of saving Captain Scott’s ill-fated Antarctic expedition. 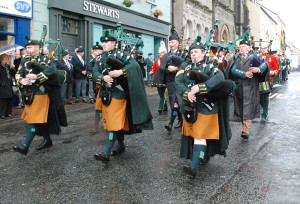 Pipers leading the march off after the service

One of the regiment’s finest hours came at the Battle of Balaclava during the Crimean War.

On the day of the disastrous Charge of the Light Brigade against Russian guns, 800 men of the 4th, 5th and 6th Dragoons, fighting together for the first time since the Battle of the Boyne as part of the Heavy Brigade, routed nearly 3,500 of the Tsar’s finest cavalry “with minimal loss” to themselves. 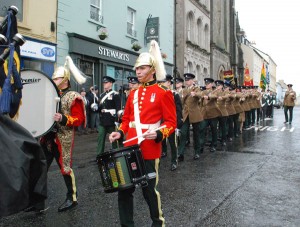 Marching off after laying up the Standard

The Commanding Officer of The Royal Dragoon Guards, Lt Col Tom Bateman, said it was an emotional day but he added that it was not the end of the Inniskillings. “It’s the continuation of their legacy to us as they pass it on to us and we the Royal Dragoon Guards will carry that on,” he said.

“We’re very, very proud of the history that they have which stretches back 300 years.” 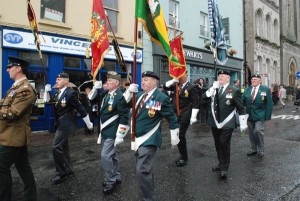 Enniskillen remains their spiritual home and their cap badge bears the insignia of the Watergate of Enniskillen Castle. 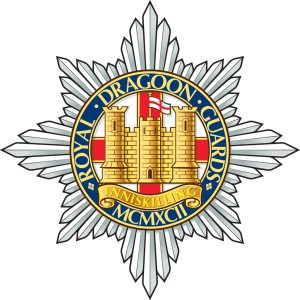 The colonel of the regiment, Brig Johnny Torrens-Spence, said the loss of the Inniskilling name is a sign of changing times.

“The world moves on and the Royal Dragoon Guards now represents Enniskillen to the Army,” he said.

Brig Torrrens-Spence presented the standard to the Dean of St Macartin’s Cathedral where it will be displayed in the regimental chapel. 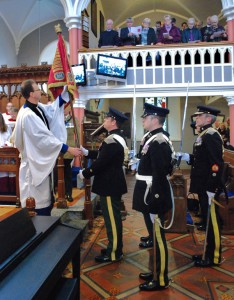 All photographs courtesy of Oliver Breen